A Riot of Azaleas

I moved to this neighborhood in springtime a few years ago, and immediately noticed all the gorgeous azaleas my neighbors had -- pale pink, scarlet, fuchsia, mauve, ivory, magenta. I don't have the time or skill to grow my own, but I can make beaded versions: 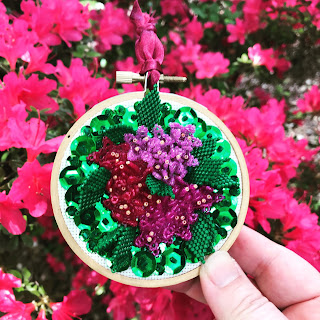 For the flowers I modified the tiny tulip pattern from The Beaded Garden; the leaves are from the same book. I had initially planned to cover the entire background with leaves, but that was overly ambitious (plus I ran out of beads) so I added a little glamour and sparkle with sequins.

It's not quite the same as real azaleas, but it'll last much longer. 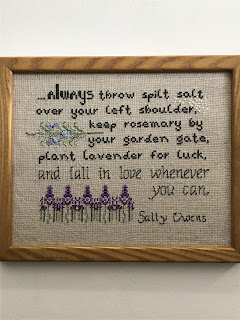 The original design called for black fabric, but I used a natural linen to better go with a couple other homey items I made (also, cross stitching on black is a major pain). For the writing I switched to DMC 844. 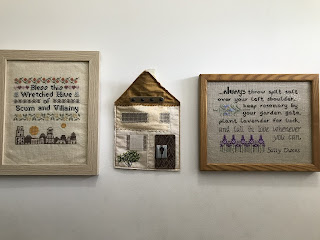 Who We Are and How We Got Here by David Reich: Reich goes over the history of the human race and its migrations, based on the latest techniques for harvesting and analyzing DNA. I'm a sucker for this kind of thing, and I was especially interested to see that modern studies are confirming what 1491: New Revelations of the Americas before Columbus argued: that the Clovis culture people were not the first to settle the American continents.  The takeaway from this book is that different human populations (and almost-humans) have been mixing and remixing for hundreds of thousands of years, far more often than we thought.

Midnight at the Bright Ideas Bookshop by Matthew Sullivan: Sullivan's debut novel is about a bookstore employee who witnesses a favorite customer's suicide; when she learns he left clues in a number of books for her, she starts a quest that forces her to confront her traumatic past. It's an engaging read with interesting characters, but be warned: the book is much darker than its title sounds.

The Hating Game by Sally Thorne: This is the enemies-to-lovers trope on steroids, and it was lots of fun to read. Lucy in particular was an endearing character, and I greatly enjoyed watching her and Josh get to know each other.

Here by Richard McGuire: this is an expansion of McGuire's original 6-page comic, showing the history of a corner of a room over millions of years. It's an amazing feat of imagination, and an unusual demonstration of life and humanity over the ages. I adored it.

The Mysterious Benedict Society by Trenton Lee Stewart and Carson Ellis: A cute middle-grade adventure involving puzzles, bullies, and a dastardly plan to take over the world. Beadboy2 wasn't interested, but maybe Beadboy3 will be in a couple of years.

Joanne Dobson, a professor of English, wrote a six-volume series centered around her fictional stand-in. Karen Pelletier is a professor of 19th-century American literature at a college suspiciously like Amherst College, where she seems to regularly stumble onto murders involving lost manuscripts, mysterious authors, and academic politics.

It's a fun series -- Karen can be a bit melodramatic (fitting given her academic specialty), but she is smart, capable, and caring. She also comes from a working class background, and was a young single mother before she even entered college, so her perspective cuts through the privilege and Ivory Tower cluelessness that can sometimes permeate a liberal arts campus. There are lots of fun literary tidbits, too, and to top it off in each book Dobson includes a pastiche of a particular writing style -- a "lost" poem by Emily Dickenson, a scandalous Peyton Place-type novel, noir crime fiction -- skillfully done.

The fifth book of the series (I haven't been able to get the sixth from my library) wasn't quite as good, and there was a decrease in the quality of the editing, but over all I recommend the series for those who want a smarter cozy mystery.

Posted by beadgirl at 1:58 PM No comments:

I is an Icy White

Remember my synesthete alphabet? I decided long ago I wanted to bead the letter I out of white beads, maybe crystals, but I wasn't sure what technique would be best. Enter Marcia DeCoster's "love letters," a perfect match for what I wanted. It uses cubic right angle weave which I had never done before, but it was easy to pick up (especially for such a small project); also easy was turning Marcia's L into an I: 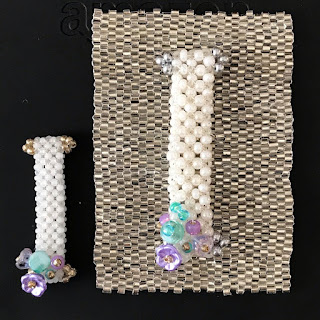 As you can see, I made two Is; the first was with size 11 seed beads, but it was too small to fit the 2 x 3 inch size of my ATCs, so I made a second with size 8 beads. The background is peyote stitch using silver-lined beads from a long-ago Martha Stewart kit. I'm not sure how this will look after the beads tarnish with exposure to the air, but if it ends up looking terrible I can always reattach the I to a new backing.

What letter should I do next?

Dorst's (the writer) and Abrams' (the idea man) novel is intended to be both a story and a physical object, and fittingly, it would fail utterly as an e-book. It consists of a fake novel titled The Ship of Theseus, allegedly published in 1949 and written by the mysterious (fictional) writer V.M. Straka, about whom little is known.  Footnotes by the translator provide textural information, secret codes, and hints at the relationship between author and translator. In the margins of the volume are the "manuscript" annotations of two readers, a college senior and a grad student, who communicate through these notes about the novel and their theories of the author's identity; over the course of three passes through the book they develop a personal relationship. Finally, the pages also contain various ephemeral items -- postcards, newspaper articles, even a napkin -- that shed light on the authorship question and the two readers.

It's exactly the kind of experimental book I live for, and for the most part I enjoyed it greatly. The fictional novel itself can be read as a stand-alone novel, and it's a weird one at that -- a man with no memory of his past becomes involved in a wide-ranging plot to undermine a criminal, fascistic captain of industry. It's an affecting story and Dorst nailed the style of the time, but it's also the kind of story whose themes give me low-grade anxiety, amplified by the fact that it reminded me so much of something else I've read but can't remember.

The annotations provide a second story, as the two readers endearingly analyze the text, argue about the authorship question, discuss literature in general, and slowly fall in love. Their notes also hint at the nefarious actions of sinister, uh, literature professors who have a stake in the authorship question, and that aspect of the plot fell flat towards the end, as it did not amount to much. But even as I grew (mildly) frustrated with the would-be conspiracy, I could not help but admire how Dorst achieved it: two handwritings and six ink colors to illustrate three stages of their relationship overlapping each other throughout the book, but nonetheless progressing the story linearly.

As I wrote above, it's an ode to paper books, but it is also a paean to writing and reading, and the way both give meaning to one's life. It requires a bit more work than the typical novel, but it is absolutely worth it.

Mary Josephine Gigax, a member of Cellini Peyote Freaks on Facebook, showed off a beaded donut she designed, and when we all freaked out about it she graciously made the instructions available.  My results: 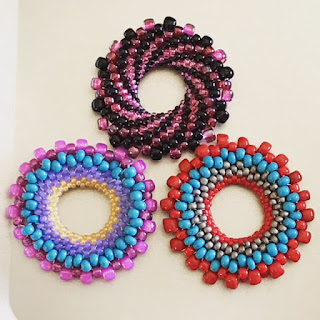 Mary's original design was with two or four colors spiraling in, but I had exactly two colors in all four necessary sizes -- 15, 11, 8, and 6 -- so for the other two I played around with rings of color. The pastel one came out a little wonky, unfortunately; the size 11s were a little smaller than they should have been, and the size 8s were a little inconsistent in their sizing.

They now live in a box with all the other beaded doohickeys and I don't yet know what to do with. 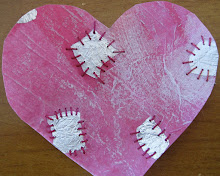